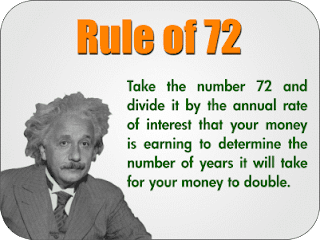 The rule of 72 is very important to you as an investor.

It works like this; take your expected rate of return, divided into 72 and the result will be the amount in years for your money to double.  This is an approximation but its pretty close, certainly close enough considering all the other variables.

An example would be an expected return of 8% will mean your money will double in 9 years.

This is very important because I think that far too many investors expect their money to do too much and thus take on far too much risk which they regret later on when its obviously too late.

Remember that to double your money in say 4 years will require a 18% return which means you will have to take on massive risk.

Think logically like your friend Einstein there.  What kind of investor do you think he'd be?
Posted by Unknown