I am asked on occasion about investing in emerging markets.  While it is tempting to invest in markets such as China, India, Brazil, Korea etc, it is also quite risky.  Besides the obvious risk inherent to investing in companies in countries outside the US that have much less stringent reporting requirements, there is also a currency risk.

I tell people that when you invest in a broad based US index fund, see VTI, then you are already getting some international and emerging market exposure since the companies within such as Caterpillar, IBM, McDonald's, Exxon & GE are already investing in those countries.
Stay tuned.
Posted by Unknown No comments:

Lower fees = money in your pocket 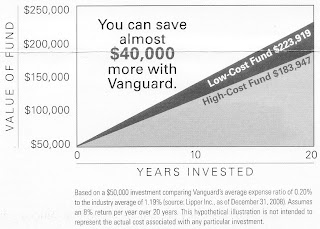 I have always said that fees are everything.  Here is a marketing piece from Vanguard.  I am not a shill, nor do I work with or for them but I do like their mutual funds and exchange traded funds (etf's) largely because they are the lowest cost, period.

Now I know you like your stockbroker but you are paying him and his firm a ridiculous amount of money for the exact same product.  If you like him so much, buy him a car because thats about what you are paying.
Posted by Unknown No comments:

I'll start out by telling you that I am not bearish, just cautious.  I noticed this article by ETF newsletter, good stuff on the parallels between 1929 and today.

When was the last time you saw stocks decline 54% followed by a 55% rally?

When was the last time you saw stocks, bonds and commodities move in sync for nearly two years?

When was the last time, a ten year investment in the stock market delivered negative returns?

Investors that care to harken back 80 years will find that the 1929 - 1932 era is the only period of time that compares to today. In fact, the parallels between now and then are bountiful and scary.

If there is one thing we should have learned from history, it's that the bear strikes hardest when least expected.  The market always tries to inflict the maximum amount of pain.

Black Monday's or Thursday's wouldn't be called 'black' if they were expected. Market tops are always marked by extreme levels of optimism.

Following the initial 48% decline in 1929, the Dow Jones rallied 48% within a period of six months. This rally was powerful and retraced 52% of the Dow points lost in the initial decline. Even though the market was far from its previous highs, investors had once again gotten excited about owning stocks and felt confident that the market would continue to move higher.

Once the bear market resumed, it erased another 86% of the Dow's value.

Did you know that the Great Depression was preceded by a great real estate boom centered in Florida? The Florida real estate bubble burst in 1926, three years before equities. Just as we've seen recently, investors took their leftovers from the real estate bust and poured it into stocks.

The bear market from the 2007 highs has humbled all markets: large cap stocks, mid cap stocks and small cap stocks. Defensive sectors such as consumer staples and aggressive sectors such a consumer discretionary. Global developed markets and emerging markets too.  This unique 'red across the board' behavior has not been seen in the 70s, 80s or 2000 bear markets. The only other similar time period to be found is during the Great Depression.

Can it happen again, possibly, the only way out is would be the growth/industrialization of China and India.

As people who attend my webinars or teleconferences know, I am wary of most people investing much in stocks anyway but this is a period in time where even savvy investors need to be extra cautious and lighten up on equities.  As I always say, there is nothing wrong with a nice safe CD at your local bank.
Posted by Unknown No comments:

Not to bore you with any more details, I bring these numbers to your attention to reinforce two things;

1. if you stayed the course and continued to add to your S&P 500 index fund or etf, you have done quite well and have lowered your average cost considerably (isnt that the point, buy low, sell high?)

2. you still dont need a stockbroker (my guess is that you were told to get out near the bottom in march 2009 or you have been under-invested during this period and failed to buy low)

Stay tuned and keep an eye out for my new book 'that little green handbook'.
Posted by Unknown No comments: 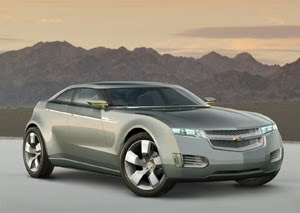 Ok, I know this is an investing blog and not car & driver but hear me out. If the Chevy Volt can deliver on its claim of 230 mpg and zero gas usage until 40 miles, that is a game changer. Period.

I never advocate single issue stock trades but I must say that this could make GM a winner. Its a good thing you can't buy GM stock today or I would be tempted, yes, I know there is a pink sheet version but thats not tempting.

A car that gets 230 mpg is a game changer like the computer in 1975 or the Internet in 1994. I knew we could do it, interesting that it took america this long but I won't get political. This will affect car companies, oil companies, suppliers and many other companies. There will winners and losers but in a good way, this is innovation and technology and only time will tell which stocks and investments will gain from this but I can certainly tell you one thing, this is good for America.
Posted by Unknown No comments:

Your approach is everything. Bottom line is that while the bulk of investors are awaiting a pull back from the March 2009 lows, I am pretty confident that any pullback will be mild.
Your approach to investing has to change if you think you can time the market. I just read an article at yahoo finance which backs up what I've known for years, that timing the market is virtually impossible.

1983-2003 period for S&P 500
Buy and Hold ~ 10%
Minus 30 worst days ~ 19%
Minus 20 best days ~ 5%
Moral of the story is that if you are willing to risk missing the best days trying to miss the worst days, go ahead but you will have probably wasted a lot of your time, and money and got nowhere. You need to change your approach to investing.
I have said it before and will say it again, buy a no-load mutual fund or ETF that tracks the S&P 500 and you are doing really all you can do.
Posted by Unknown No comments: 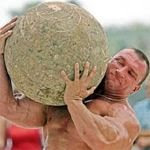 I blog, write and speak about investing all the time. One common theme is that very few can beat the S&P 500 with any consistency so why try. Buy the S&P via an ETF or no load mutual fund and forget it, you will end up beating 91% of investors and save a fortune on fees.

Unless you've been living under a rock, you know the name Warren Buffett who is one of the rare individuals / institutions that have beaten the S&P 500 with some consistency. If you like him, and its hard not too, you are in luck, you can invest side by side with Warren Buffett by owning his companies shares (Bershire Hathaway) which is listed at the NYSE as brk-a and brk-b.
Let Warren Buffett do the heavy lifting for you.
BTW, WB obviously has a vested interest in his companies shares but it is interesting to note that he buys US treasuries for his personal account.
Posted by Unknown No comments:

How do you think you can out invest all the highly paid money managers and traders?

Its simple, very simple and the reason you hear very little about it is that no one has a vested interest in educating you.

Buy the S&P 500 and forget it. Thats it. Back when I was a stockbroker, there were alot of barriers to doing this. There were mutual funds that tracked the S&P but you had to pay a broker to buy them and of course there were minimums and account fees, etc.

Now, with ETF's (exchange traded funds) such as vanguard and very cost effective accounts such as fidelity and scottrade, you can buy your way into the S&P slowly, with the money you have set aside for the long term (yes, i said long term, ten yrs or more) and let it sit.

You won't beat the market but you will participate in it with the lowest possible fees. This doesn't mean you can't lose money, it means you will track the S&P which is the benchmark by which 90%+ of money managers and traders cannot beat with any regularity.

The investerati has convinced the public that if you save a few extra dollars or come into some money, that you need to 'invest' it in the stock market. This is simply not true, there is nothing wrong with a nice safe CD or money market at your local bank.

Having said that, if you have decided to invest, do yourself a favor and invest on your own and save a fortune.

The investment community are masters of marketing and have you convinced that you cannot invest on your own.

Here's the scoop. 91% of money managers cannot beat the S&P 500 and neither can your stockbroker of financial advisor.

How do I know? I was a great salesman and convinced alot of people to take on more risk in stocks and got paid well for doing it. The dirty little secret is that you can do the same thing yourself and save alot of money, hundreds of thousands over a lifetime!

Most stockbrokers or financial advisors are genuinely good guys interested in your accounts well-being. The problem is that stockbrokers (and thus the brokerage firm they represent) get paid by assets under their control and charge you a management fee of 1%-5% to do nothing more than you can do. Value added, are you kidding? How did you do over the last year?

Stay tuned for exactly what to do.
Posted by Unknown No comments: